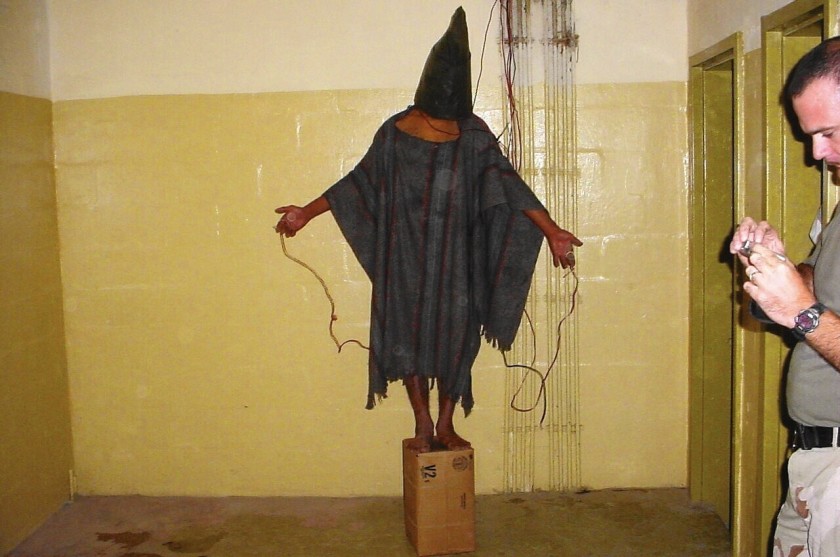 This image is taken from the scandal in the war in Iraq about the Abu Ghraib torture and prisoner abuse. Where United States Army and the Central Intelligence Agency commit a series of human right violations.

Here in Spain, in my beloved country, I suffered the same but less physical violations but all in remote in the neural monitoring network. This technology is used by corrupted part of Guardia Civil), the Spanish National Intelligence Center and military forces. Also some nobles has got access to it. The infrastructure that I've perfectly described is opened and was develop from the Franco dictatorship above citizens, human guinea pigs. Almost low level class citizens, deported by the dictatorship.

But remember that I live in Catalunya and those state forces here are present but there are also others that pertain to the Generalitat de Catalunya [9].

What I've suffered has been visualised by almost all the people that I've known in my life. But no one help me, nor who I've been considered my parents. They was thinking that I will commit suicide or I will go crazy. I'm in perfect health and mental state. God bless you.

Now on 2020 they are playing with my internal organs to produce cancer and others dysfunctions.

This is how I can describe the electronic tortures that I've lived, 2018 was a very bad year next the decrease the power of the tortures and now they are trying to debilitate me.

But this will not happen.

Those are the tortures that I've suffered:

Also my ex girlfriend has suffered various tremendous tortures for what I know physically and in radio:

My best friend, Massimo, is also an enormous victim of the noble network, he suffered from when he was an adolescent various crimes like:

And I even don't know what else because he and she has fear to speak because this is a monarchy and the principle rule is to not speak about this network and the Machine.

But I really deeply appreciate themselves. I know that they cannot fight in public because they've got child and those criminals forced them to do those horrible crimes to themselves and, remember, not to others, so they are absolutely not criminals. Look above, those that are the two most important persons for me here in Barcelona in reality have not suffered exactly what could be classified as torture but as to be targets individuals, like me that had suffered also electronic torture. I want to help them to be free from the chain of this absurdity in the democratic Europe. Because just I love them. Nothing more nothing less. And I receive continuously death threats in radio just because I do.

Have no fear sweetie and dude. No fear. We're going to act in this absurd circus but in reality we have to fight for our rights. You, the twos, are not totally conscious on what are your right in democracy. Your rights are constitutional no one, nor the monarchy, could break them. No one. Nor the church. No one.

Call me guys. Call me. We've to fight together not loosing time in stupidity but doing what I'm doing, I know that you've not the technological culture to do this but I will do it for you. Just come here and speak about your life and the Machine without any problem.

The machine is a crime. Is a monster. Is what is changing our Europe. And you have child. Don't loose time trying to fight with those enormous titanic selling drug or selling yourself. At the question how we will live? It's simple. Working. Monarchy could not destroy your legal work. This is a full stop. I'm not a stupid and the king of this country know it.

Logbook of tortures which Riccardo Giuntoli is subjected First of all I want to speak about that every time that I go to Barcelona and I stay alone Saray torture me. Every time. Sometimes also Massimo. The twos work for nobles houses. Massimo for one from Genoa and Saray from the most important of Catalunya. I think that in families with two brothers it's normal that one work for one family and the other for another. In this manner the two brothers doesn't have a good relationship. It's better for the parents probably they gain from more money. It's like have sons to create slaves but I don't think that is related to the parents, is because they are slave. It's a slavery chain hidden but not unknown.

On 16 of April 2022, Catholic final day of Holy Week known as Holy Saturday, Francesca, who surname is connected directly with Jesuits and considered as heroes by the Italian Republic, is just heavy torturing me saying "you don't understand that my game is try to let you suicide. Full stop. I only torture you to archive this."

From June 2020 I start to log every type of torture that I received in radio:

She is protected by some Vatican orders. Those are building about Vatican a systematic terrorist State. 2021 another year that I'm living under continuous electronic torture. Every days and every nights. In front of all the people that I've known in my life. My parents also Before being tortured due to a scam to steal my business where I was working on February 19th 2015. As you can see my baldness was not at all pronounced, now August 2020 I am completely bald and irregular in shape. On 28 of November of 2015 I've got a very strange motorbike accident. Those accident are caused to take biometric values of the target individual. In those infrastructures there are members that stole medical values, being a self conscious human camera and gain money in crypt concurrences. Whit those values that have to be taken from a CT scan, better saying the accident have to be dangerous this is why my arm was broken and two friends of mine have died with accidents, criminals, that are aristocratic members, connect the target individual to the remote neural monitoring network. And they enslave him. Like me. Probably also some EEG pattern and hearth pattern is taken to connect the target individual to various different technologies.

Corrupted members of hospitals probably also send the data physically so they are totally guilty.

In my life I've done a lot of motorbike and car accidents. It's from I was an adolescent that aristocracy want to connect me to slavery. Why? Here it was 19 of October of 2017, one month and eight days after I was been connected to the Collserola tower. Here I've passed the loose of my job, of my house, of my girlfriend and a semi mortal provoked motorbike accident. I've loose fifteen kilos and almost all my friends. It was a lot of bad situations but at the time I was not thinking about a systematic plot. But yes it was.

c/ sant Pau, Barcelona was the address. I think that this house, furnished in a very curious shape, pertain to a circuit. The suicide and slavery business circuit of Barcelona. Why I was there? Because a woman. Here was 2 of November 2017, twenty five days after I was inserted into daily tortures and humiliations. I always have been a very good man with all. I don't really know why I'm suffering this hell in front of many persons that I've known in my life. Here I found evidences of the identity of the Catalan head of this facility. A facility that take money to suicide businessman from foreign countries that work in Catalunya. This is the only true but the worst think is that also my parents have participated to the systematic destruction of my life. Full stop. Has you can see here my hairs I was losing my hair, I had already suffered various attacks of gang stalking and gaslight. More than a hundred people had closed and threatened me in a club. A hell was about to unveil before my eyes, the hell of a sect dedicated to suicide under commission by Catalan entrepreneurs and under the super vision of Catalan, Spanish and Italian aristocrats. Francesca is the instigator of my tragedy and the suicide and murder of several of my friends. Here I am in November 2018 one year after my electronic torture started. I was searching for Saray because in the vision machine she always say to me that they violate her. I walk for three thousand kilometers. This was done for:

Those are some results about this indirected inflicted torture, remember that this torture was planned, executed perfectly and in a indirected mode, and was full of pain and suffering also about my ex girlfriend. A woman destroyed by the slavery network. A woman utilized like a bitch from soldiers, secret services: And that is another result of a prolonged walk:

Neural excitation. High brain temperature, and it's only for twenty minutes. Image in summer, for three days and with electromagnetic weapons torturing me. Baldness is the first result, the second could be permanent brain damage.

On 27 of June of 2020 I was violated by the wireless brain machine interface, a shell that someone has hacked in the military remote neural monitoring network in Barcelona by a crew without any doubt contracted by the Catalan big noble family to magnify the suicide business. The security analysis is public and it's done by the Murcia university.