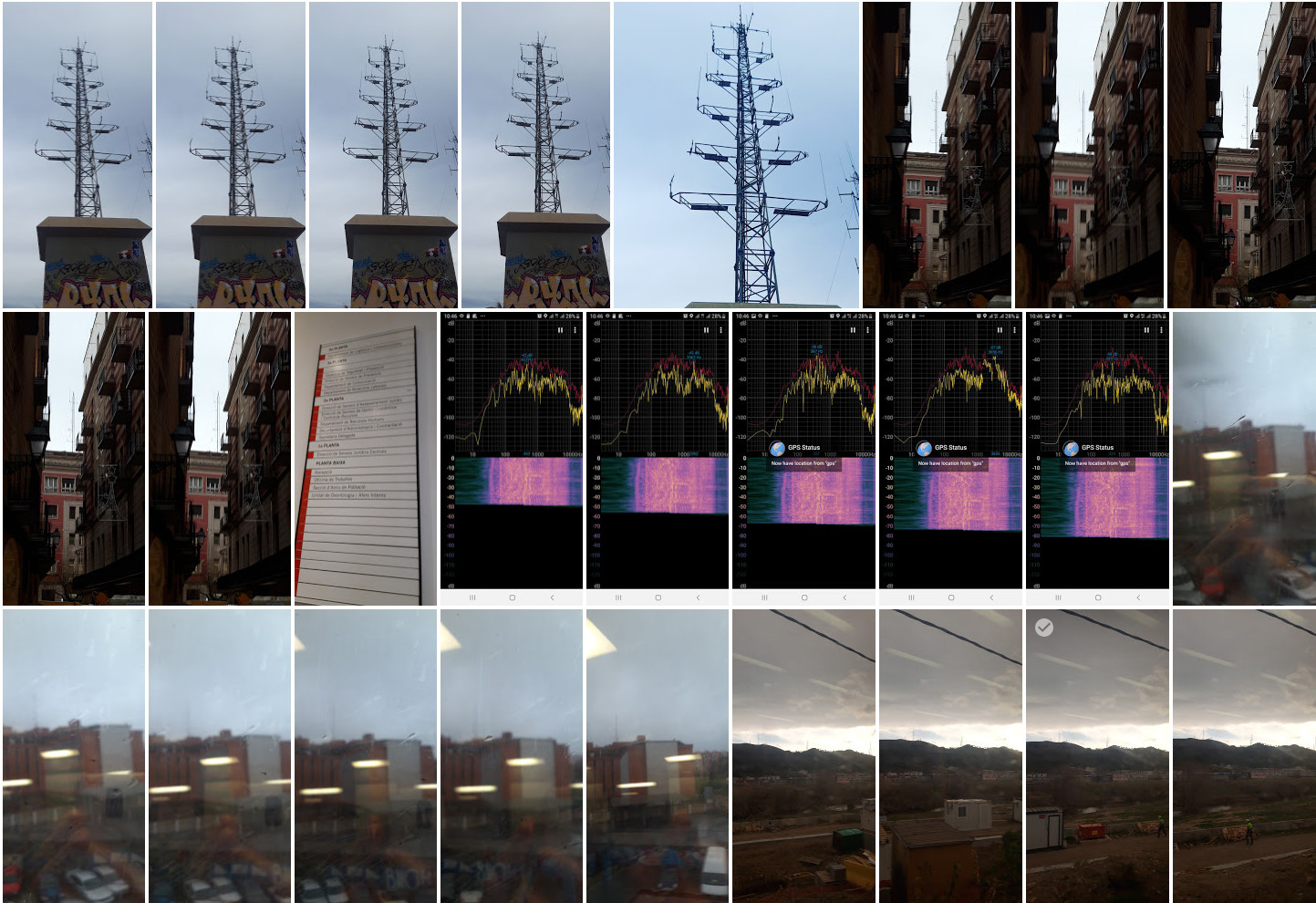 In Spain, the country that I'm love to and where I'm actually living, there is an unknown but not hidden neural network based over terrestrial radio waves technology.

It's almost used by the cast, nobility. But also it is used to guarantee security in this area because it is actively adopted by military forces and military polices like the national Guardia Civil and obviously by secret services.

In Catalunya, an autonomous region with semi independent authorities, it's actively used.

But its use is not only legal or for a little circle of users. Nobles play with this with citizens brains and here they have build an enormous humans beta test garden used big big tech firm facilities to develop high level neuroscience technology. But also it's used to control low level B-side market, like drug and prostitution. For those that are obliged operators in this low level massacre, in others words for those who are slaves there are three modes to enter in the market from being a simple slave to be an operator, that is always a slave because he has to change is state from being an abused to be an abuser. Those three modes are:

To worst think is that in this territory I've understand that this network is also connected to old buildings of an administration still with some Franco train. Or better saying that some office of the administration and of the national police have seen my persecution. And no one have said nothing. Corruption? Probably yes.

Why I speak about hacking?

Because nobles use clever boys and girls in a sadistic game of money and guilt. They give one legal access to the noble neural network, every noble got one because its state to pertain to the official nobility list, to an hacker crew to build a game.

What is a game? A proxy in the neural network hidden with security to complexity and obscurity to guarantee that little drug dealer or small pimples are controlled and subjugated by a pyramidal system of gain over a condition practically equal to slavery.

In Catalunya the word "anonymous" is used to cover this nobility game. Slavery nothing more. And I'm victim of. And the love of my life is also. Saray.

I've recollected some images from the Catalan infrastructure of the Spanish neural network:

In Barcelona on the summit of a hill that dominates all the Catalan capital there is what in the underground city's slang is known as "la nau", "la nave", "the ship". A white small house similar to the colors that we found in Athens on whose roof it dominates a Coptic cross. On the right side you can appreciate the main mast of the allegorical ship, a telecommunication tower which exactly resembles the mast of a cruise ship that in fact is a telecommunication tower.

A Coptic cross is associated with Coptic Christians or better Copts. This ethnoreligious group that speak historically the Coptic language the latest stage of the Egyptian language. 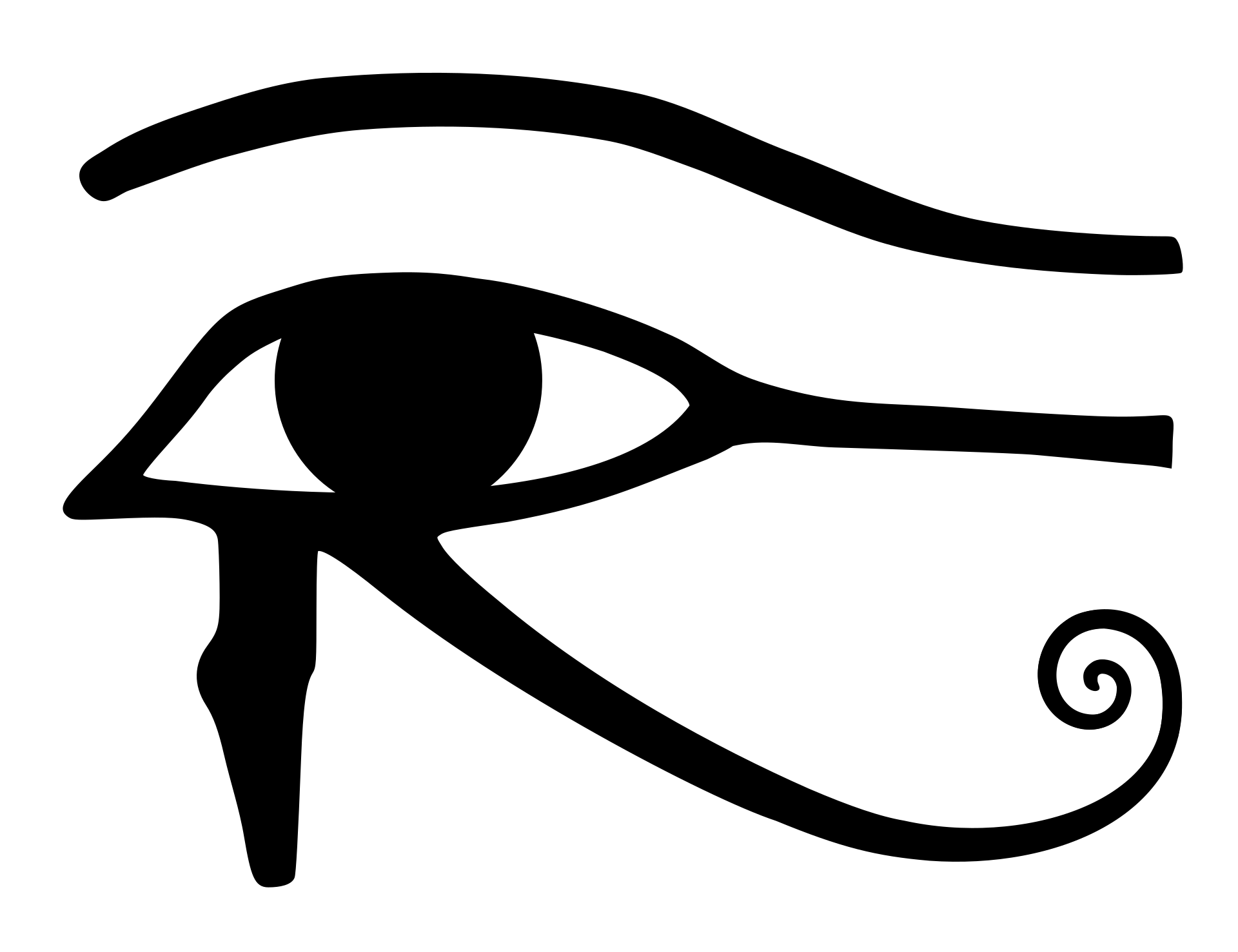 In the wikipedia article about the Coptic language on the right you can appreciate this symbol, that in the ancient Egypt was interpreted as the eye of Horus. In the "Illuminati" fraud, that in reality is a digital pseudo dictatorship that is destroying our democracy, this symbol is often use as what is called the third eye, that has got mystical and esoteric concept to deflect the attention of an investigator and to subdue weak minds in order to make them become slaves as sexual as being drug dealer. This is fraud take it root on Internet from the late eighties and has Genoese families as theorists. This fraud is a paramilitary group that has got hackers as soldiers, but not only. Remember that Illuminati was a secret society, and those are the " new world order" [15]), that is only an enormous fraud that have killed indirectly with accidents and suicides a lot of people.

This phantom third eye is nothing more than technology. Is the remote neural monitoring network. And the hill in the middle of Barcelona is the telecommunication center of this facility but here people doesn't work physically all is done in remote with IoT devices acting as bridges. This telecommunication center, "the ship", is known also as the "cathedral of techno ", but not the music, the technological department of those criminals.

However techno music is very present, the first "Illuminati" games based on the fracture of a stable couple and always based upon remote parimutuel betting system and using radio waves as technology they can be located in the underground rooms of Italian progressive techno. Why is very present? It's simple in discotheques there is a lot of young people dancing and they can be considered places where special people are lured, usually girls, using drugs and this technology they can be slaved and evolved in sexual harassment.

And for the "tourist kill the city" collection here you are a photo album with all the towers that operate in all the spectrum but in reality very specialized upon ELF and SLF in this magic site:

There is a special antenna in all those towers that connect with an enormous installation in the biggest tower of Barcelona. The state one. The Collserola tower. 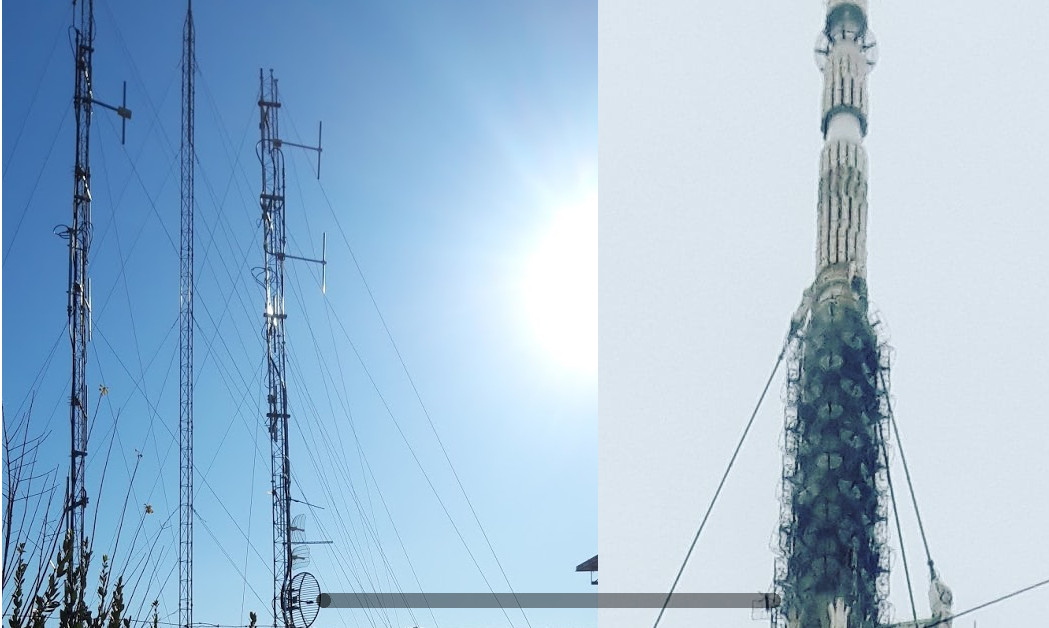 It's very probably that this virtual point to point radio bridge exist and it would actually show that governments are also playing in the gangstalking shop.

Some geographical points of presences.

This is a WISP node that fusion the remote neural monitoring access radios, on the left, and the Ubiquiti network IP infrastructure.

The WISP was of my property until 2016, then with a fraud I loose it and they start to induct to suicide me. The name is MESWIFI and now has got an AS number that is AS205645.

The top antenna is a point to point radio wave in proprietary protocol, called AirFiber. Gigabit wireless. This antenna focus to a tower in Tibidabo over Barcelona. Next another access point to the "Illuminati" facility focused over the Catalan capital reducing to slavery a lot of citizens. 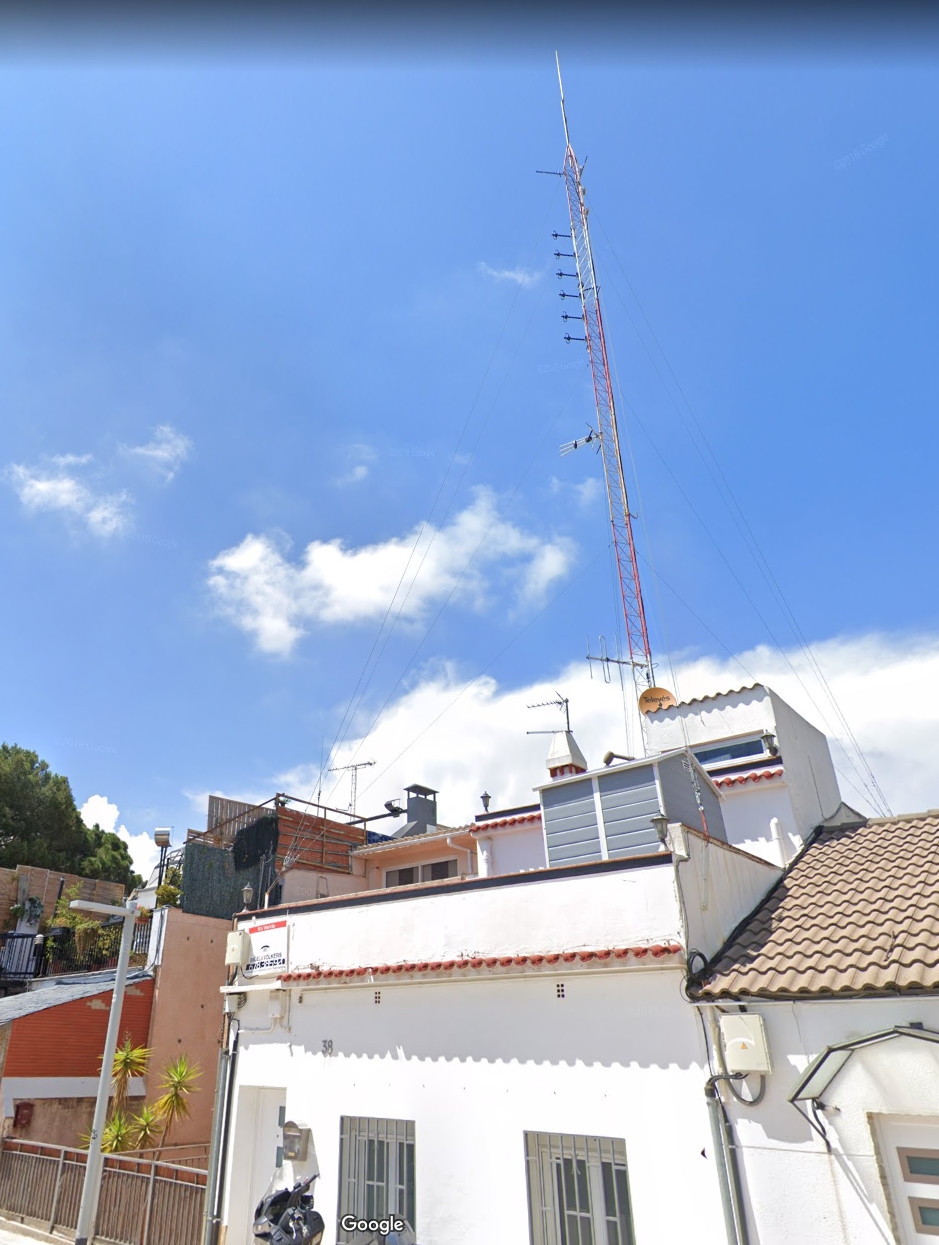 This image is taken at 41º 25’ 10.57” N, 2º 09’ 48.39” E geographical coordinates that can be retrieve on Google Street View aged at the time of writing. As you can appreciate the technology is the same and, yes, is the infrastructure of the "game" "Illuminati" that in reality it's a fraud but it is changing our Europe being a pseudo digital dictatorship. 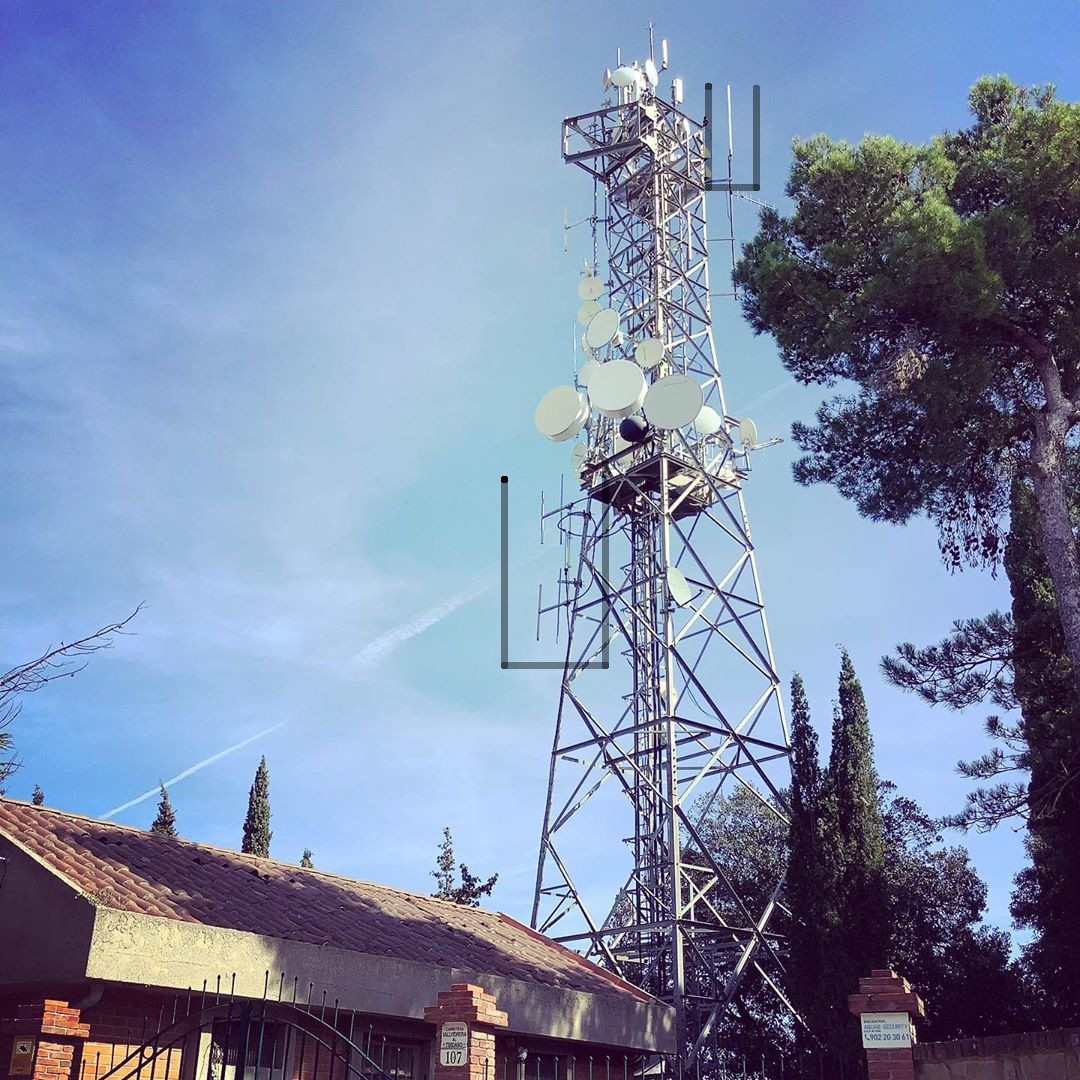 This image is taken at 41º 25’ 23.42” N, 2º 07’ 9.42” E geographical coordinates that can be retrieve on Instagram on the social network profile of my old wireless Internet service provider dated on 27 of November 2019 stand out in gray you can appreciate part of the same installation. But there is no magnetic loop antenna. So, no extreme low frequencies, no brain network. 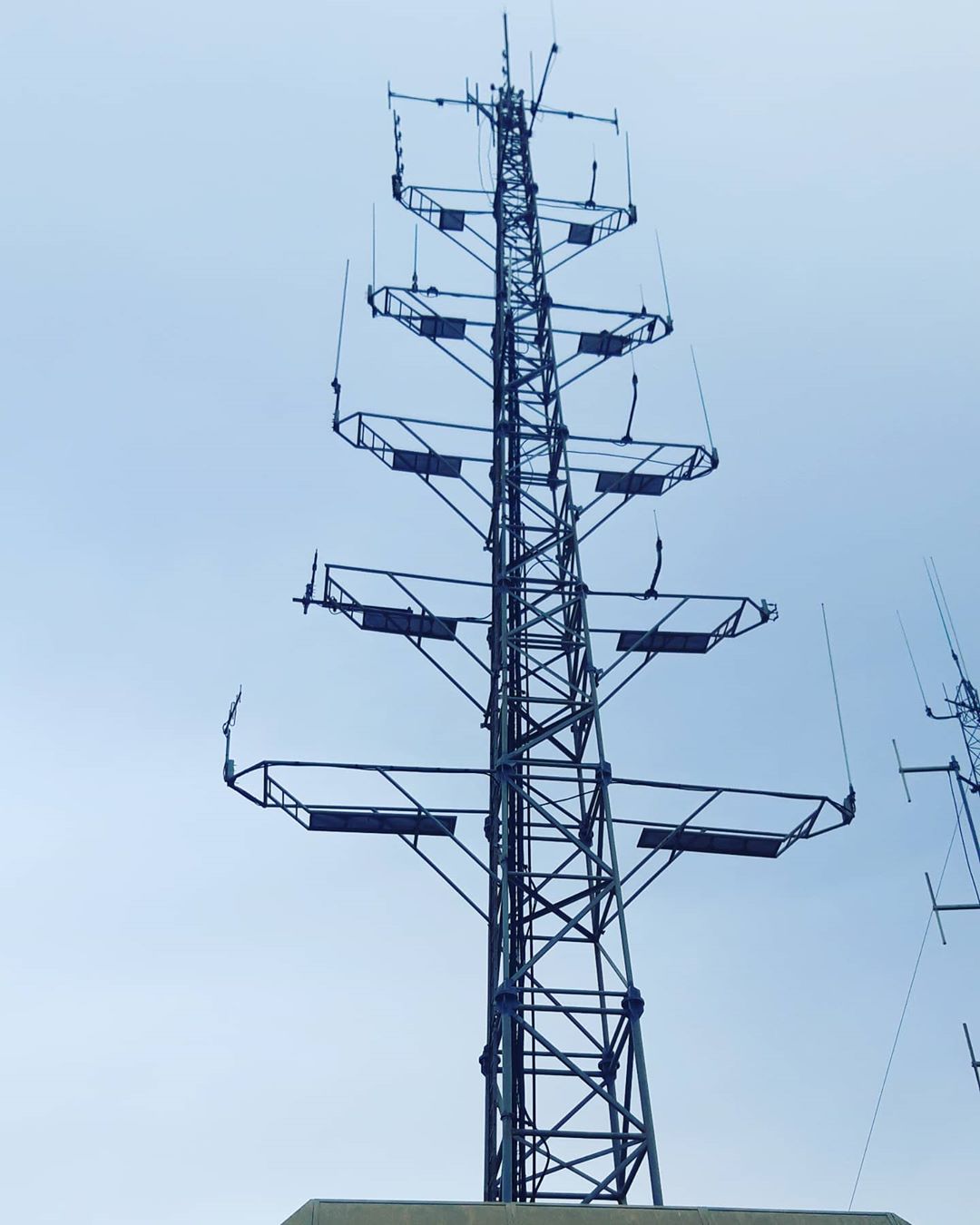 This image is taken at 41º 25’ 9.56” N, 2º 09’ 41.88” E geographical coordinates. Is the tower and is dominating the city of Barcelona. The place is an hill in the middle of the city that is full of ELF and SLF transmitters. The name is Turó de la Rovira and is the principle tower of emission. The "Illuminati" game is served by the black antenna, in this photo is at the second floor on the left. Other equal antennas are underlined. 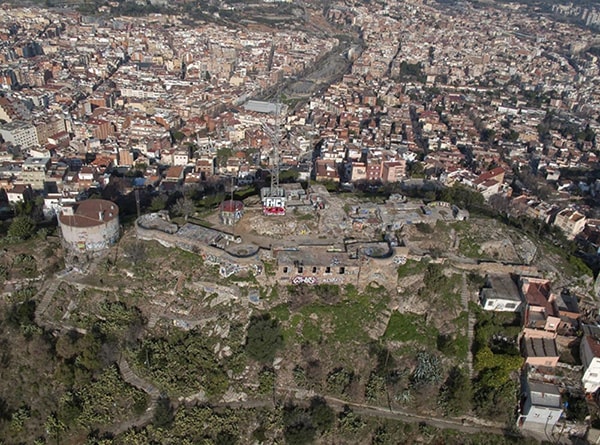 In Turo of Rovira where the telecommunications towers of the radio waves "ship" are installed there is a Spanish civil war bunker. There is another point of presence very disturbing on the first line of mountain upon Badalona near the Catalan capital.

This is a building from a Catholic related foundation, its name is fundació Pere Tarrés. This foundation has got a primary goal, working with child. And this is what is disturbing me, but it is only my suppositions. As you can see the last yellow building has got a little tower mounted over his roof. Look at this image taken from google earth: Those black antenna are the same of what I've found on the Turò de Rovira installation, those antennas are VHF/UHF antennas and normally are used to bind TETRA communications. Why a security forces system is mounted over a little tower in a Catholic foundation? It's not normal because the left one is focused exactly in the direction of the unique Catalan monastery of Carthusians monks. Its name is Cartuja de Montealegre. Are they police? No they are not. Why they have a personal point to multipoint access antenna theoretically to a police telecommunications system? Have they one receiver upon them roof? No they have not. Why? Because this antennas form part of one of the most hide and terrifying telecommunications system in our united Europe. The remote neural monitoring network in Catalunya. An enormous scandal.

Them coat of arms that you can appreciate in the link above got seven stars, 7 is the number of the deadly sins but also is the number of the victory in the slot machines. It's a game. A noble game, a game of the most ancient European noble family. But them surname is encrypted in my chapter noble houses. This photo is from Turro de Rovira installation. Searching on the web I've found two provider that got those antennas utilized in the remote neural monitoring network:

Catalunya it's absolutely full of those antennas. The coverage is capillary. If they where antennas for normal TETRA operations they should only be installed in towers duly protected by regulations. What are they doing on some occupied houses? Sure, but nevertheless I don't know for sure, or well they use a modified version of this protocol together with others in ELF and 3GHz to form this terrifying network or if not they mount these antennas to deceive at sight even the experts who consider them an installation by law enforcement. Their diffusion, their position make it without a shadow of a doubt the most overwhelming proof I have of this ghost net. Fruit of a brilliant mind, you who read me every day, the pillar of a medieval Catalunya. But why I speak about TETRA masked installations? Why I consider them totally illegal and strictly connected to the digital mafia that reign over Catalunya, Liguria and probably all Europe?

Start to do some clever considerations about it. DOMINT, searching it in google the first word that catch my attention is ECHELON. Someone speak about conspiracy, but no, this system exist and at my opinion every country got one and probably all of them got a galaxy center a site where an extract of the important one from every country is processed. So it's not a conspiracy. And I'm victim of. Why?

Speaking about laws that are very important in this first step to try to go out from this hell network because I'm not a terrorist but a normal man I've found this important document from the European Parliament on the existence of a global system for the interception of private and commercial communications (ECHELON interception system) (2001/2098(INI)):

Look at those grid antennas on the image above. They are exactly the same that I've photographed in the Collserola tower, the most important of Barcelona: I was a wireless internet service provider one installation in this tower could be only by the state in the way of military forces or the most important provider in the State, Movistar. It could be also from a joint venture of those two big noble families. I really don't know, personal from the tower doesn't give me details about.

But why a lot of them pointed to the sky? Let me image it. Nothing good.